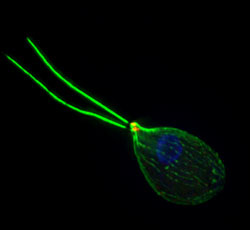 Naegleria Gruberi or N. gruberi
Naegleria Gruberi lives in wet soil or freshwater. It has a 3 stage life cycle: amoeba, flagellate, and cyst phases. As an amoeba, Naegleria Gruberi has no definite shape while as a flagellate it has a bacillus shape from the cytoskeleton and has a tail. The cyst phase creates a star-like appearance with the angles. NG is commensalistic. In the amoeba phase it eats phagocytosis of bacteria and divides by binary fissionas amoeba, if the amoeba starts to starve it becomes a flagellate so it will be able to move around to find food. They do change back to the amoeba to eat. It reproduces in the amoeba phase. It can also change into a cyst but it eventually goes back into an amoeba. 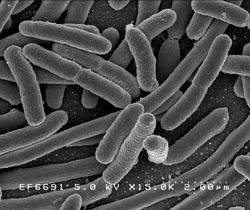 Eschericia colli or E.colli
In order to survive, E. coli needs cold temperatures and humidity. Different stereotypes of E.coli survive and grow at different temperatures, usually 44.5 C. E. coli populations can survive and even grow in open environments. However, under fluctuating environmental conditions, such as those present in many soils and aquatic environments, growth may be differential and gross bacterial death may ensue if the death rate exceeds the growth rate. Both growth and death rates are determined by the environmental conditions at the local scale and by how the microorganism is able to cope with these local conditions by regulating its gene expression patterns.
ReproductionAsexually: Binary Fission

Binary Fission: A method of asexual reproduction that involves the splitting of a parent cell into two approximately equal parts.

Reproductive Rate: cell division of about once every 30 minuets. 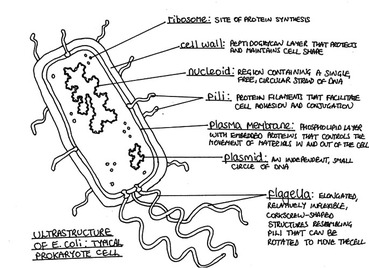 WORD BANK
Conjugation : the transfer of conjugative or mobilizable plasmids from one bacterium to another by cell-to-cell contact.

Pathogenic: a bacterium, virus, or other microorganism that can cause disease.

Plasmid: a genetic structure in a cell that can replicate independently of the chromosomes


Polyhedral: a solid figure with many plane faces, typically more than six

Genome: the haploid set of chromosomes in a gamete or microorganism, or in each cell of a multicellular organism.


Cohesive: characterized by or causing cohesion