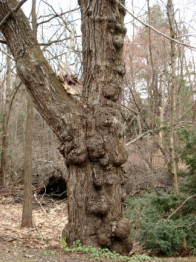 Agrobacterium tumefaciens or A. tumefaciens
A. Tumefaciens is a tumor in a plant! Pathogenic strains of A. tumefaciens may live saprophytically in soil for up to two years. When a nearby host plant is wounded near the soil line by insect feeding, transplant injury or any other means the bacterium  moves into the wound site and between host cells. These bacteria then stimulate the surrounding host cells to rapidly and irregularly divide. A. Tumefaciens has parasitic relationship with the plants because it is only benefiting the microbe and killing the plant with the tumor it induces.

A TUMOR FOR A PLANT Oh MY!!!
Phases
Lag Phase
Bacteria do not grow during the lag phase. They begin making copies of their DNA, and if the environment supplies plenty of nutrients, the lag phase may be very short.

Log or Exponential Phase
During the log or exponential phase, bacteria multiply rapidly. The time it takes for a culture to double is called "generation time," and under the best conditions, the fastest bacteria can double in about 15 minutes.

What does is eat?
Agrobacterium tumefaciens "eats" nutrients that leak from the root tissue this is also one of the adoptions it has made in the ecosystem. 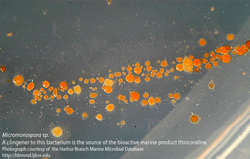 Micromonospora equina or M. equina
M.equina found in the soil of the rain forest and is aerobic bacteria. It has a polyhedral head, a flexible tail and has a small genome with double-stranded DNA and cohesive ends.  M. equina is HETEROTROPIC.

Adaptation: feeds on dead pant material and has a flagella.

* This is a relatively new bacteria so there was not munch information on it.
Phases
It has 3 stages of life which includes differentiation into substrate mycelia, aerial hyphae, and spores
What does it eat?It feeds on dead or decomposing  plant material!

Morphology
CIRCULAR, FLAT, ENTIRE
WORD BANK
Conjugation : the transfer of conjugative or mobilizable plasmids from one bacterium to another by cell-to-cell contact.

Pathogenic: a bacterium, virus, or other microorganism that can cause disease.

Plasmid: a genetic structure in a cell that can replicate independently of the chromosomes


Polyhedral: a solid figure with many plane faces, typically more than six

Genome: the haploid set of chromosomes in a gamete or microorganism, or in each cell of a multicellular organism.


Cohesive: characterized by or causing cohesion