The Benthic Zone is commonly called the ocean floor  but, can also be the bottom of a fresh water body of water and has many species still undiscovered.

Learn more
WHAT IS IT?
The Benthic Zone is one of the only ecosystems that has yet to have every species discovered! Some limiting factors for it are.... light⛅️! The benthic zone is the deep part of any body of water and the light can reach only so far down, so producers do not live down there because to undergo photosynthesis. Temperature is also a big limiting factor, the deeper the water gets, the colder in gets making some organisms stay out of the benthic zone!

The rainforest also has biotic factors ( living factors 🐍🐝🌳) and Abiotic factors ( non living 💧🔥). The biotic factors are common whelk(green shell),blue mussel(the blue shell), Neptune whelk(shell to the left of the blue one) ,periwinkle( Looks like a snail shell). Some abiotic factors are Water, a colorless, transparent, odorless, tasteless liquid that forms the seas, lakes, rivers, and rain and is the basis of the fluids of living organisms. Sand, a loose granular substance, typically pale yellowish brown, resulting from the erosion of siliceous and other rocks and forming a major constituent of beaches, riverbeds, the seabed, and deserts. Rocks, the solid mineral material forming part of the surface of the earth and other similar planets, exposed on the surface or underlying the soil or oceans. Temperature, the degree or intensity of heat present in a substance or object, esp. as expressed according to a comparative scale and shown by a thermometer or perceived by touch. Water Pressure, Fluid pressure is the pressure at some point within a fluid, such as water or air. Dirt, a substance, such as mud or dust, that soils someone or something. Light, the natural agent that stimulates sight and makes things visible. And lastly Salinity,  salt; the taste experience when common salt is taken into the mouth 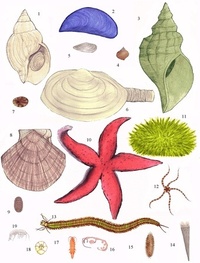